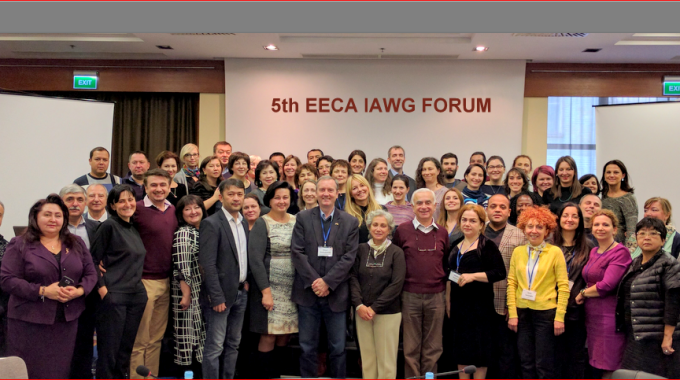 Information on the Fifth Forum of Inter-agency Working Group on Eastern Europe and Central Asia for sexual and reproductive health in crisis situations, organized by the Fund for the United Nations Population (UNFPA) and the International Federation for Family Planning (IPPF), held from 18-20.10.2016, in Kiev, Ukraine

Within the professional cooperation between the Ministry of Health of the Republic of Macedonia, the United Nations Population Fund  (UNFPA),and Institute of Public Health of the Republic of Macedonia, as a National focal point in the field of training and the health care crisis in the Ministry of Health, World Health Organization (decision N.12-3179/1 from 21.03.2006 year) prof. Dr. Mihail Kocubovski chaired the fifth Forum of Inter-agency Working Group on Eastern Europe and Central Asia for sexual and reproductive health in crisis.The Macedonian team comprised of representatives from the Ministry of Health Mrs. Sanja Sazdovska and Ms. Nermina Fakovikj Mrs. Aphrodita Shala Plavjanska by UNFPA and Ms. Vesna Matevska by HERA. Caspar Peek, UNFPA and Lena Lukfasel, Program Director of IPPF Brussels had the opening speech.

All representatives expressed their expectations and goals of the meeting,and the Action plan of inter-agency working group for Eastern Europe and Central Asia for sexual and reproductive health in crisis.

Lena Lukfasel, Programme Director of IPPF presented the results of a questionnaire on the role of the Supervisory Committee and the sustainability of inter-agency working group and future opportunities. Chairman of the Steering Committee Prof. Dr. Mihail Kocubovski and two other members from Georgia and Uzbekistan gave a brief overview of their activities and suggestions for improving the performance.

Safe hospitals initiative of the WHO and its importance was presented by Mikhail Pisla, a scientific researcher at the National Center for Public Health in Moldova.

Also, the Draft Action Plan for 2017 was presented by the participating countries.

Prof. Dr. Mihail Kocubovski from Macedonia was reelected as a Chairman of the Supervisory Committee of the Inter-agency Working Group on Eastern Europe and Central Asia for sexual and reproductive health in crisis situations in the next two years.

Taking part were 68 representatives from 21 countries from the Ministries of Health, Institutes of Public Health, UNFPA, IPPF and civic associations in the field of sexual and reproductive health.

Related Posts
INFORMATION on the situation of measles in the Republic of North Macedonia in 2018-2019, August 1, 2019
In the period from 26.07-.08.2019,, a total of 5 cases of measles were reported. From…
Health Requirements and Recommendations for Travellers to Saudi Arabia for Hajj and Umrah 9 June 2019
The Ministry of Health in the Kingdom of Saudi Arabia issued this document to address…
Video: Substance use among 15- to 16-year-old students (ESPAD 2015)
Search
ИНФОРМАЦИИ ЗА COVID-19