The bread is the main ingredient of nutrition in many countries of the world, and it is one of the largest sources of salt. The latest survey of the World Action on Salt and Health (WASH), which exists within the University of Queen Mary in London, shows the shocking levels of salt present in this product. The research involved over 2000 white, whole, mixed and other types of bread from 32 countries and regions. More than a third (34%) of the loaves had more salt than the maximum salt target in bread in the United Kingdom (1.13 g / 100 g).

In Macedonia, a particularly high amount of salt is found in white breads (1.42 g / 100 g), which are dominant in the diet of our population.

A quarter of the products involved in the research did not have an explanation on the size of the portions on the packaging.

Many countries have voluntary or mandatory targets for the maximum amount of salt in the bread. Reducing salt intake in bread is easy and effective way to reduce population salt intake – researches show that the amount of salt in bread can be reduced by 25% for a period of 6 weeks, and consumers will not notice any change at all.

A recent WASH survey found that a third of participants thought that the WHO could do more in encouraging countries to reduce salt intake, but still most of them think that the responsibility of the governments of countries in terms of such an initiative and change is greatest.

The Institute of Public Health of the Republic of Macedonia calls for the adoption of targets for the highest permitted amount of salt in bread, as well as continuous controls.

Regarding the research, Mhairi Brown, a nutritionist at WASH, said: “This research clearly demonstrates the progress that has yet to be made to reduce salt intake by 30% by 2025, according to WHO recommendations. The bread is the most important food product, but also a key source of salt in our diet. Globally, we have to do more to reduce salt intake, and the simple way to achieve this is to reduce salt in the products we eat most often. ”

Dr. Graham McGregor, a professor of cardiology at Queen Mary University in London and chairman of WASH says: Eating too much salt increases our blood pressure, the main cause of brain and heart attacks that is the cause of most deaths and disabilities in the world . Reducing salt intake worldwide would save millions of lives each year and all countries should work to reduce salt intake by 30% by 2025. Our research has shown that many bread producers in the world add unnecessarily high amounts of salt in their products. Governments must react now and work with the food industry in order to reduce the amount of salt in basic food products. ”

Dr. Igor Spiroski from the Institute of Public Health of the Republic of Macedonia and assistant professor at the Medical Faculty in Skopje who is a member of WASH and was a participant in the research in Macedonia says: “Salt is an important part of the diet of our population, and from the public health aspect the most important is its role as the “carrier” of iodine that is indispensable in prevention of certain diseases. However, the population in Macedonia contributes at least twice as much salt compared to the recommendations of the WHO. Salt intake through white bread is characteristic of the fact that this bread prevails in the diet of our population and it turned out that the quantities of salt in that bread are among the higher, even worldwide. The state, in cooperation with the WHO and the food industry, has to launch activities aimed at achieving WHO’s goals of reducing 30% of salt intake by 2025. ” 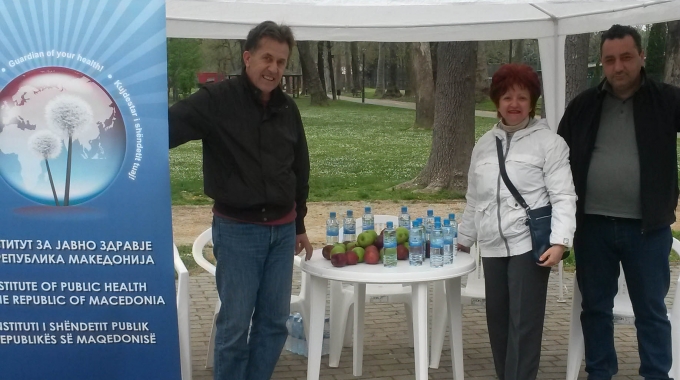