Cardiovascular diseases are the leading cause of death globally, they cause more deaths than all other causes together and affect most low- and middle-income countries. Within the non-communicable diseases, cardiovascular diseases with malignant diseases are the cause of almost three-quarters of deaths in the European region. The estimations show that at least 80% of all heart diseases, stroke and type 2 diabetes can be prevented.

Each year, cardiovascular disease are the cause of 17.3 million cases of premature death, and by 2030, it is expected that 23.6 million people will die of these diseases. These are projected numbers/results from the World Health Organization (WHO), and it is expected that CVD will remain the leading cause of death worldwide.

The most common risk factors for cardiovascular diseases: high blood pressure, high cholesterol, obesity, poor diet, smoking, lack of physical activity and elevated blood sugar. A significant number of deaths attributed to smoking or tobacco, which increases the risk of death from coronary heart disease and cerebrovascular disease 2-3 fold. The risk increases with age and is higher in women than in men.

SITUATION IN THE REPUBLIC OF MACEDONIA

Chart  2: Mortality from circulatory diseases in the Republic of Macedonia,  2010-2016

Chart  3: Mortality from circulatory diseases in the Republic of Macedonia  by age, 2010-2016

Chart  5: Mortality from cerebral vascular diseases in the Republic of Macedonia  by age, 2010-2016

According to gender, in the period 2010-2016, the mortality from circulatory diseases is slightly higher among women than men.

Chart  6: Mortality from circulatory diseases in the Republic of Macedonia  by gender , 2010-2016

Chart  7: Mortality from ischemic heart disease in the Republic of Macedonia by gender , 2010-2016

Chart  8: Mortality from cerebrovascular diseases in Macedonia by gender , 2010-2016

SDR, diseases of circulatory system, all ages, per 10 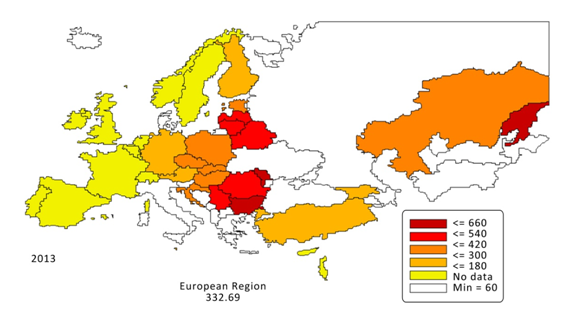 In the period from 2010-2016, in the Republic of Macedonia the acute myocardial infarction accounts for about 93.0% of ischemic heart disease and cerebral infarction and stroke, bleeding or unlabelled infarction by about 87.0% in cerebrovascular disease.

Considering the fact that there is a 80% chance to prevent the heart disease, Macedonia implements measures based on the evidences, in order to prevent risk factors such as tobacco use, unhealthy diet, physical inactivity and harmful use of alcohol, timely recognition of CVD, improved treatment of secondary and tertiary level, strengthening the health system personnel, equipment, reconstruction of old and construction of new hospital facilities and other measures. The main objective is to address the growing burden of population with cardiovascular disease and reduce disability and mortality from these diseases.

Institut of Public Health of the Republic of Macedonia and 10 Public health centers within the public health activities in order to raise public awareness for the prevention of cardiovascular diseases, organize continuous lectures, debates and promotional materials produced in this area.

This year, will be marked World Heart Day – September 29, as the main event in the City Park in Skopje, on location Shell, on September 27 (Sunday) in the period from 9.00 to 14.00 pm in cooperation with NGO Healthy Future Association of Citizens suffering from cardiovascular diseases, representatives of health institutions in the public and private sector and other interested structures.

Part of the funds paid by the Health Insurance Fund of Macedonia (HIF) to the selected doctors are intended for the implementation of preventive measures and activities.

The HIFM defines preventive measures and activities as preventive goals that are implemented to insured persons in order to prevent the occurrence of illnesses and are intended for those who do not regularly visit their chosen doctor.

The selected GPs carry out fourteen preventive goals. The Goal 11 is:

– Preventive measures and activities for early detection of chronic non-communicable diseases (CVF – cardiovascular assessment) in the population aged 25 to 65 years in both sexes.

For the implementation of the 11th goal, tables containing the following characteristics / parameters were prepared: sex, age, tobacco use, body height, systolic blood pressure, laboratory findings, previous infarction, previous stroke, left ventricular hypertrophy with ECG and the presence of diabetes. For each of the given characteristics / parameters (which are both risk factors), appropriate points are collected and the total number of points (SCORE) is obtained. Once the total number of points (SCORE) has been obtained, the degree of risk of cardiovascular disease may be determined.

With the introduction of a systematic approach among the selected general practitioners in PHC for the timely detection of potential risk factors and their removal, it is possible to significantly prevent the occurrence of urgent cardiovascular manifestations (cardiac infarction or stroke), and thus the occurrence of premature death among the population . 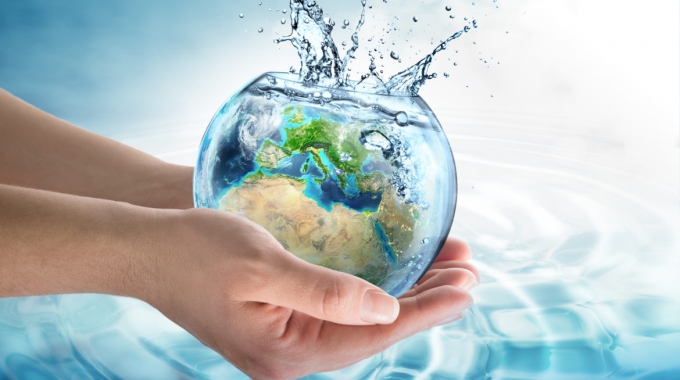 World Water Day 2018
World Water Day, on 22 March every year, is about focusing attention on the importance…
INFORMATION on the situation of measles in the Republic of Macedonia in 2018-2019, until 08.03.2019
A brief overview of the epidemiological situation with measles in Macedonia   This week, a…
Search
Recent Posts
Categories
Today is