Malignant diseases, with cardiovascular disease are the leading cause of death worldwide and in our country. Worldwide, cancer of the cervix is located on the 4th place as the most common form of cancer and 4th place as cause of death in women. In 2012 there were 528,000 cases detected. The same year there were 266,000 deaths. Over 80% of the cases are in developing countries.

The American Cancer Society offers the following list of risk factors of the cancer of the cervix:

Infection with human papilloma virus (HPV) is a frequent factor in the development of nearly all cases of cervical cancer. HPV infections are very common and occur in about 80 percent of all sexually active people, whether they have symptoms or not. The link between cancer and HPV is the causing changes in cells of the cervix, which may lead to the development of cervical intraepithelial neoplasia, which can lead to cancer. HPV infections usually do not show any symptoms, so thereby, the partners may not be aware of current or previous HPV infection. In the Republic of Macedonia from 05.10.2009,( by the decision of the Minister of Health, HPV vaccine is introduced for girls, aged 12 years, as a compulsory in 2010.)

SIGNS AND SYMPTOMS OF CERVICAL CANCER

Cancer of the cervix can be presented with vaginal bleeding, but symptoms may be absent until the cancer has not come to the  advanced level (phase). The first recognizable symptoms of the disease include:

In the Republic of Macedonia, the rate of newly registered cases is around 22.5 per 100,000 inhabitants. In the country, recently, the total number of new cases of malignant neoplasms shows shows slight upward trends, with the participation of 3-6 place as the most common primary localization of cancer in women. Death rate from cancer of the cervix is ​​decreasing (from 2000 with 6.5 – until 2015 when were registered 3.8 per 100,000 women).

Institute of Public Health of the Republic of Macedonia

In 2012 in the country started  organized screening for cervical cancer for women aged 24-35. Next year, free Pap tests were performed on women aged 36-48 and the third year on women from 49-60 years. The aim is to undertake timely intervention and treatment to prevent the development of overt disease. The activities for this purpose were implemented by the Ministry of Health with the Institute for Public Health and the Centres for Public Health, the gynecologists and cytological laboratories. The number of examined women, Pap tests in organized screening for cervical cancer in the period 2012-2015 increases. In 2012 were made 17595 Pap tests, and in 2015 – 29887.

From the cytological analysis of smears in 2014, 3.8% found epithelial cell abnormalities, while in 2015 this percentage was 2.9%.

In the first half of 2016, from a total of 15099 analyzed preparations, 12% of incurred Pap tests detected cell abnormalities. Among them, the most common group is women who discovered CIN 1 (accounting for 41.5% of the total number of detected cell abnormalities), followed by HPV (34.1%), ASC-US (13.6%) and CIN 2 (7.9%). CIN 3 / CIS  accounts for 1%. It was discovered one case of invasive breast  cancer and 2 cases of invasive suspected cancer.

This speaks for the eligibility of the program, aimed at early and timely detection and prevention of cancer of the cervix in the latent and / or early symptomatic stage. This will reduce the incidence and mortality from cervical cancer in the country, which is the main objective of this Programme.

Cervical cancer can be prevented through the application and implementation of the following preventive measures:

Related Posts
Information for the general public during heat-waves
THROUGHOUT A HEAT-WAVE, FOLLOW THE RECOMMENDATIONS OF THE LOCAL HEALTH AUTHORITIES   Keep your home…
Overview of the epidemiological situation with HIV in North Macedonia and the results achieved under the 2019 HIV Population Protection Program (up to December 1)
Key facts about HIV worldwide   37.9 million people live with HIV worldwide 1.7 million… 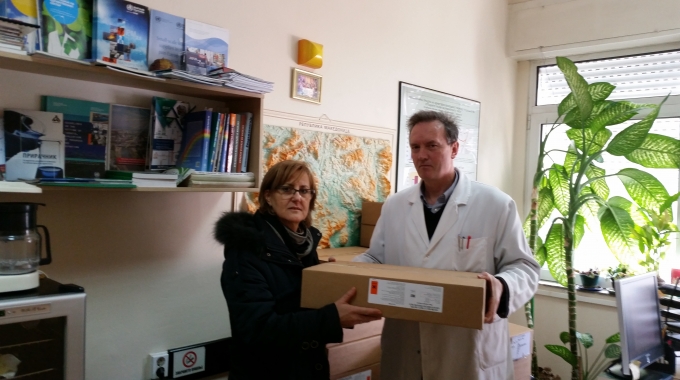 Ministry of Health and UNICEF distribute tablets for disinfection of drinking water supply facilities to the citizens of the flooded regions in Macedonia
Skopje, March 6, 2015 Following the environmental health assessment by the Institute of Public Health…
Search
ИНФОРМАЦИИ ЗА COVID-19